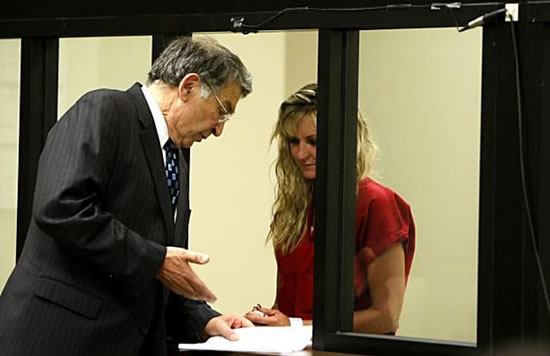 Livermore, Calif. (San Francisco Chronicle) – The 42-year-old Livermore mother accused of sexually assaulting two teenage boys first made an advance at one of them when he was 14 and was dating her daughter of the same age, authorities said.

After the incident in December 2008, authorities said, Christine Hubbs sent sexual text messages to the boy and gave him cash, expensive gifts and cellular telephones to maintain contact with her.

The allegations, contained in a police affidavit, were revealed Monday as Hubbs appeared in an Alameda County courtroom in Pleasanton to face charges that have stunned her suburban city.
The mother of three was arraigned on 67 felony counts, including unlawful sex with a minor and exhibition of lewd material to a minor.

Wearing a jail-issue jumpsuit, she flashed a quick smile at her husband – who waved at her from the second row – but cried as the hearing wore on and a judge ordered her bail set at $4.3 million. She did not enter a plea.

About a dozen friends showed up to support Hubbs and her husband of 20 years, Tim Hubbs, a well-known dentist who attended high school in the area.

Christine Hubbs’ attorney, Jules Bonjour, asked that the media respect the family’s privacy. A friend of six years, Robyn Azevedo of Oakley, said a tight group of friends was surrounding the family.

Read the rest of the article here ».